Four years ago, my wife and I were desperate. We had looked everywhere in Florence for a good materna school for our elder daughter, and were despairing of ever finding one. Our checklist was not particularly demanding (or so we thought). We wanted, in order of importance, a school for 3-5 year olds: (i) that stimulated; (ii) that had no excessive religious or ideological baggage; (iii) that had a good student-teacher ratio; (iv) that was reasonably priced; (v) that was socially mixed; and (vi) that was, if possible, multicultural (we are a British-Italian family). We put a lot of time into looking – open day after open day… – and we were ready to drive a fair distance, too. However, we just could not turn up a school that matched our requirements in a city of half a million. Then, one happy morning we were told, by a chance acquaintance, about the Margherita Fasolo. The most wonderful school experience was about to begin…

The Fasolo is one of Florence’s best-kept secrets. It stands, near Via Aretina, in its own grounds, next to an elementary school, on Via Cambray Digny, and is based out of a modest concrete building: a passerby would, I think, never guess that he or she was walking by a centre of educational excellence. The Fasolo was founded in 1965, in another part of the city, as an ‘active education’ school. I never, honestly, understood what ‘active education’ means: though if you think of an energetic version of Montessori you are ‘ball-park’. Children play, but play purposefully and are given a series of activities (that they develop as they see fit) through each day and many of these activities are carried out in the Fasolo’s lovely garden. The activities are ingenious and are often, the highest compliment, repeated by our children (with accompanying songs) at home. There is also a lot of attention given to resolving problems as a group and negotiating difficulties. If I had read this on a school flier, I would have assumed that this was just ‘talk’, but the Fasolo has certainly improved conflict resolution in our not always happy household!

Crucially, teacher-student ratios are small. There are two teachers in each class looking, together, after anything from ten to twenty children. There are, I think, six teachers in all (with some part time assistants) and they have, of course, different personalities and different abilities. However, a strong ethos of preparation and retraining means that the quality of the teaching is consistently high and some of the teachers there are simply phenomenal. I was asked recently about the best teachers I had had as a child, and my mind kept floating involuntarily to the teachers that my daughters encountered at the Fasolo, my daughters’ experiences crowding out my own memories! These women (the one male teacher has left) have proved themselves to be loving towards our children, but also wise. On a couple of occasions, when we were concerned about aspects of our daughters’ development, we were given excellent advice in after school interviews. Theirs, clearly, is a vocation rather than just a job.

The parents are typically local, but rave reviews have encouraged some families to come from further afield: one mother comes every day from Prato because she had been to the Fasolo as a girl and had had such a good experience. Families have, in any case, different backgrounds. In my daughter’s class there are, at present: a British, a Polish and two Australian children, so about a quarter of the class have non-Italian parents. We have also found that parents bond very well, perhaps the result of common values and, of course, because of the many common school activities. Families often meet after school in the nearby parks, with their children. Many of our most important family friends, in the last years, have come through this school. Ten months after our elder daughter left my wife still has an active WhatsApp feed of parents from my elder daughter’s class. Moreover, when the mothers from that year get together they lament that the Fasolo ‘failed them’, by not creating an elementary section (the level above materna). My elder daughter, meanwhile, insists on going back for frequent visits. 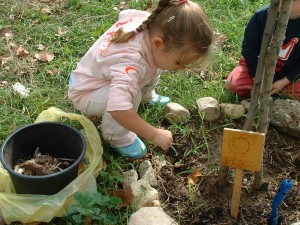 The school is private but non-profit and asks about 400 euros a month per attendee (I don’t have the exact number to hand), though, my understanding is that there is some room for negotiation if a family sends more than one child. When we, first, visited the Fasolo this seemed like a lot of money, but I am glad that we made the sacrifice: it was paid back to us many times over. This sum includes the price for lunches made by a local chef in the excellent Fasolo kitchen: my elder daughter is now at elementary school and refuses to eat the food served up for her there, comparing it unfavourably to her earlier gourmet feasts. There is also a nido that looks after babies from one and a half to three and that is based on the second floor of the building. Soon I hope to take my youngest daughter to the Fasolo (she is at present six months old) and I am thrilled at the idea of starting the whole happy cycle again: people I trust and methods that work.

If anyone is interested in knowing more the website is www.scuolafasolo.net If you want to set up a visit, the email is segreteria@scuolafasolo.net, the telephone number, meanwhile, is 055/6594828: ask for Alessandra. I and my wife have spent a lot of time in the last years sniffing out schools (some good and some absolutely dreadful experiences) and we have often found that parents are better guides than those who work in schools (for very understandable reasons). If anyone wants, then, to get in touch with us directly about the Fasolo, these are our emails. Just type the email address of both of us in the address line:

We will give honest advice or try to put you in touch with parents who can.  Written by Simon Young